The latest picture book by west coast author Ainslie Manson and illustrator Mary Baker, A Giraffe Called Geranium, is a whimsical story about a giraffe who somehow finds her way to British Columbia. The giraffe is adopted by young Susanna and is given the name Geranium.

Baker’s dreamy watercolour illustrations show a romantic and picturesque depiction of a west coast town full of soft flowers and featuring many images of a lighthouse. The illustrations often add to the story by providing information not found in the text. For instance, the end papers show a map of the route the giraffe took when sailing between Canada and the eastern coast of Africa. Images also show the giraffe swimming towards Canada from a boat.

…a gentle picture book about a different friendship. It is a good read-aloud story for a small group that will enjoy the beauty of the West Coast depicted in the illustrations.

Wind, Rain, Fog – you name it, but on just about the worst evening of the year A Giraffe Called Geranium was officially launched on November 25, 2014 at Kidsbooks. As we ferried and drove through this weather, I feared no one would come – but there were so many people they could hardly get in the door and out of the foul weather. AND we sold 68 books! Everyone seemed favourably impressed with our newborn book baby!

Thank you, thank you one and all! 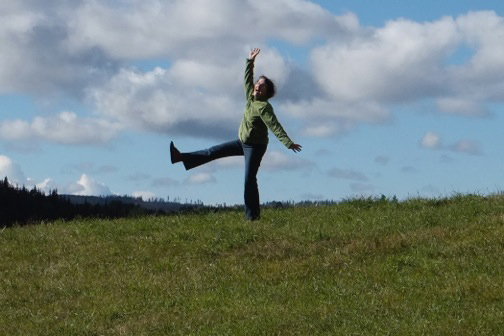 Would you like to purchase a copy of A Giraffe Called Geranium? It is now available at Vancouver Kidsbooks and other Children’s book stores from coast to coast or if you wish to order online go to Red Diamond Books.