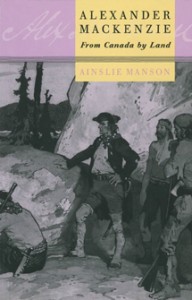 “Do you plan to remain here to be sacrificed?” The trembling voice was barely audible. Alexander Mackenzie tried to ignore the terrified voyageur nervously tugging at his coattail. He was worried too, but he wasn’t going to show it. He was well aware of the canoes gliding silently toward them through the early-morning haze. He took a deep breath before replying. “Pack our belongings into the canoes, he told his men, his voice steady. “And don’t worry, I won’t be long.”

Alexander Mackenzie was the first European to cross North America by land. The journey, which took place in 1793, demanded courage and determination and could never have been achieved without the help of the First Nations people. Mackenzie’s successful crossing opened up a store of new opportunities for Europeans, but it led to a dramatic invasion of the lives of the Native peoples.

The retelling of Mackenzie’s life provides a fascinating glimpse into the early days of the fur trade in Canada — what it was like to spend each day in a canoe with hearty voyageurs, the trials (some friendly, others fearful or hostile) and the constant power struggles between the different fur-trading companies.

Richly detailed and informative sidebars describe the songs of the voyageurs, life in the pays d’en haut, pemmican (“a little time reconciles it to the palate”), “Our Dog” (who ran along the shore beside Mackenzie’s canoe) and the antics of the infamous Beaver Club.

The Globe and Mail

Ainslie Manson’s biography puts flesh on the bones of this man, humanizing him for young students of Canadian history in a manner that doesn’t detract from his almost superhuman qualities. … written so that readers know what Mackenzie and his men ate, what they saw as they paddled and portaged across a vast and uncharted land, and what they felt as they struggled with the disappointments that preceded that first view of the Pacific Ocean.

The continuities in historical writing for children come out most clearly in these biographies. Alexander Mackenzie: From Canada by Land and The Amazing Adventures of Captain Bob Bartlett are classic tales in a Victorian mould. …Manson and Browne have crafted fast-paced and exciting tales, each with the requisite brushes with death, narrow escapes from peril, and displays of physical prowess. What is most striking, though, is that one can easily imagine these books as serials in a typical Boys’ Annual of the 1880s or the 1920s.

This retelling of Mackenzie’s life provides a fascinating glimpse into the early days of the fur trade in Canada, the struggles between the different fur trading companies, and the hardships that faced all the hardy men that traveled into unknown country. There are many direct quotes taken from Mackenzie’s journal, a detailed account that he kept of his journeys. The text has many vivid descriptions, and the reader can certainly picture the events and people of the story. There are also a good many illustrations, most of them obtained from the National Archives of Canada. Unfortunately, some of them are almost too dark to decipher.

Is Canada a nation in search of heroes? Ainslie Manson provides a biography of explorer and fur trader Alexander Mackenzie that avoids the pitfalls of “great man” hagiography and faceless collective history. This short book presents a strong narrative, skillful compression, and an abundance of intriguing detail about the fur trade in the Canadian west during the late 1700s and early 1800s.