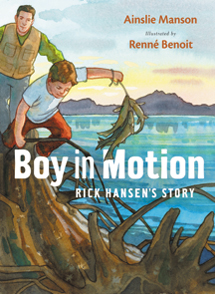 As a boy, Rick Hansen loved fishing from the moment he dangled a willow rod over the water and felt that first tug on the line. Then, on his way back from a fishing trip, his life was changed forever when the truck he was riding in flipped over. In Boy in Motion, you will meet the boy who loved to fish and play ball, and the young man who learned that as a paraplegic he did not have to leave behind fishing or ballgames or any of his other dreams. Instead, his dreams grew and grew, and he went on to change the lives of many people.

The Globe and Mail

Luminous watercolours amplify this very fine biographical picture book in which the hero — yes, that’s the right word — is Canadian Rick Hansen, the “man in motion” whose self-propelled wheelchair travels took him 40,075 kilometres around the globe during his Man in Motion world tour. Hansen undertook the tour to encourage people to “make communities more accessible and inclusive for those with disabilities and to find a cure for spinal cord injury.”

With an elegant economy of words, Ainslie Manson recounts Hansen’s life as a boy who could never sit still, a boy who loved all sports and was mad about fishing. The idyll of his early life was shattered when the truck in which he was hitchhiking flipped over. Hansen, in the twinkling of an eye, became a 15-year-old paraplegic and began the rest of a life, documented here, that is being lived in the fullest sense, both for himself and for other people with disabilities.

Manson deftly navigates picture-book terrain, condensing great swaths of often difficult material into an accessible narrative…Manson sounds an inspirational chord in this biography, emphasizing the “no such word as can’t” spirit that motivates Hansen, his family, and friends. By depicting Hansen as a regular kid who overcomes obstacles, Manson underscores the idea that the extraordinary, even heroic, is within everyone’s grasp, a message that teachers and librarians can certainly get behind.

It’s coming up on 20 years since Rick Hansen completed his historic Man in Motion tour. (The official date was May 22, 1987.) That means a whole generation has passed since the Vancouver paraplegic took up Terry Fox’s torch and set off to conquer the world by wheelchair. Youngsters who don’t realize that not one but two Canadian champions hail from these parts will find pride in Hansen’s life story, told briskly and unsappily here by Ainslie Manson with folksy paintings by Renné Benoit. Manson draws out Hansen’s indefinable spirit and enormous drive as she presents the story of how the boy in motion grew up to be a hero. 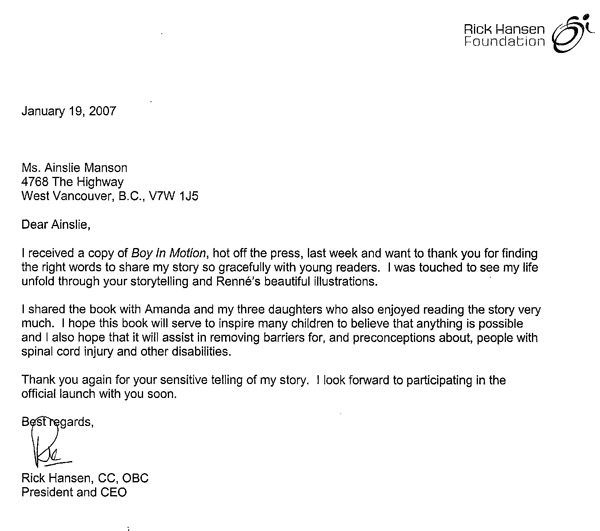 It is my pleasure to inform you that Boy in Motion will appear in the upcoming Outstanding Books for Young People with Disabilities exhibition launched at the Bologna Children’s Bookfair in March. Following the exhibition, one copy of the book will be featured at the permanent exhibition in Oslo, while others “will travel the world.” It is not a traditional award, but “a special designation,” as Kim Behnke, our Rights, Permissions and Marketing Associate put it.

Currently, I have little more information regarding the decoration, but if you have any questions, I would be pleased to investigate them for you.